The Disney College and International Programs began in 1981 and expanded to Epcot in 1982. The original programs started with about 500 cast members and later expanded to over 4000. The college program was not only a magical experience for these cast members but a great opportunity for interns and international students to travel and enjoy America. Thus Making the Disney Party Bus an excellent way of achieving such.

Sadly, for almost 28 years, the employees in this program worked hard long hours for very little pay. Many found themselves missing out on opportunities to do things because of the high transportation and activity costs. So in 2009, We had an idea... Let's start the party bus! It was to be the greatest idea to ever service the Disney College Program... as well as become one of the highlights of many cast members programs for years to come. 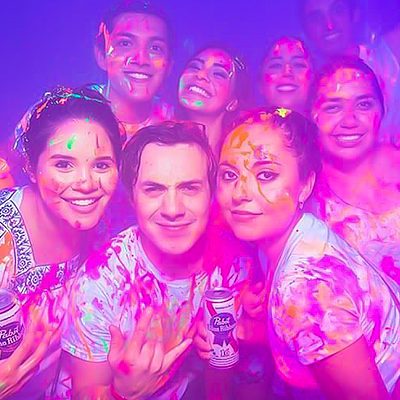 Hi, my name is Wil, and in 2006 I was also Disney cast member. I worked at Disney's Blizzard Beach water park for about a year and had many great experiences and friendships throughout my time being there. On our days off many of our coworkers would head to Downtown Disney to enjoy some drinks and dance at Pleasure Island. Pleasure Island was a strip of clubs located in Downtown Disney was later renamed to Disney Springs. We would go between there and Buffalo Wild Wings on Wednesdays because it was the only place most castmembers could afford since Disney had free transportation there from the housings. It was a lot of fun.

Unfortunately, in September of 2008, Disney decided to close Pleasure Island and all of the clubs in Downtown Disney. The House of Blues, which was the only place to be on Sundays, was the only club the wasn't closed. It became a hot spot because it was free for Disney castmembers. We found now ourselves stuck to only going out on Wednesdays and Sundays and occasional Thursdays to Roxy for college night. Therefore, anything beyond that was either too expensive or a place we weren't old enough to get in.

Something had to happen

I began taking pictures at Buffalo Wild Wings on Wednesdays of all the cast members coming to the night and this is where I grew a real passion for photography. I wanted to take pictures in all the clubs so I started asking around if anyone needed a photographer. Unfortunately, I was denied and was told that their promoters already had a photographer, and if I was a promoter it would be different.

So there it was... The key to becoming a photographer in these venues was my ability to promote a club. So I started the Disney College Program Party Bus. I negotiated deals for cheap transportation on every night of the week to get around the high costs for taxis to and from the clubs, and got the clubs to give us exclusivity, complimentary bottle service for our guests, and free cover 18 & up for everyone on the buses. Wow... Everything was great! We now had somewhere to go every night of the week, and it soon marked the beginning of the Wil the Photographer brand.

How does it work?

How the party bus works is simple:

The party bus always includes round trip transportation, and most events will have free cover unless otherwise noted in the event. On select nights we will have free drinks in our VIP section for available to all patrons of the party bus. Drinks will be available for as long as the bottle lasts.

On day trips, activities can sometimes be included in the price but it's always safe to validate on each listing. All the events are different and are subject to change from time to time.

© Wil the Photographer. All rights reserved.